Fast food restaurant brand Taco Bell is bringing back the Mexican Pizza, as announced by Doja Cat at Coachella, but what did the singer do to establish its return and how did she become the chain’s spokesperson?

Doja Cat’s debut Coachella stage was everything we wanted – and more. She brought out Tyga and Rico Nasty, and performed new song Vegas that will feature in Baz Luhrmann’s forthcoming movie Elvis.

What we didn’t expect was breaking news regarding the return of the Mexican Pizza at Taco Bell. The singer is known to be a loyal fan of the fast-food fave and has been campaigning for the item’s return since it was taken off the menu in 2020.

Let’s take a look at her perseverance for the sake of Mexican Pizza over the past year.

Doja Cat, a Taco Bell partner, announced the mouthwatering news at the weekend and the chain followed with a press release on Monday, stating the singer “literally dropped the mic with the hot news of the Mexican Pizza’s return this May”.

It wasn’t just Doja at the forefront of the Mexican Pizza movement, more than 200,000 fans signed a Change.org petition spearheaded by Krish Jagirdar, who called the item a “bridge to American culture for kids who grew up in immigrant households”.

The Mexican Pizza, which features refried beans and ground beef sandwiched between crispy tortillas and topped with melted cheese and tomatoes, will be available from 19 May.

The 200,000 signatures surely made a difference but would it have had the same impact without a passionate celeb at the forefront?

Taco Bell removed the fan favourite in 2020 as chains streamlined menus following the pandemic, while the packaging reportedly “accounted for more than seven million pounds of paperboard annually in the US”.

The Say So singer’s history with the chain dates to May 2021, when she tweeted her determination to bring back the pizza.

Taco Bell congratulated Doja Cat on her album release in June 2021 but never got back to her about the product. By September, an irritated Doja complained to Taco Bell.

“I want my Mexican Pizza back @tacobell why u quiet”, she tweeted.

Two hours later, the company hinted it was actually considering the Mexican Pizza’s return but all remained quiet until Doja asked for more information after Taco Bell featured one of her songs in a commercial.

By February 2022, the rapper was truly part of the Taco Bell team as she starred in its Super Bowl 2022 ad, The Grande Escape, covering Hole track Celebrity Skin.

The 26-year-old proved she could create music about anything with her viral ditty about the food item, although she forbade anyone to call it a jingle. Joking she was forced to make a song due to “contractual reasons”, she claimed she had tried to make the track bad but it came out pretty catchy and went viral on TikTok.

There you have it, Doja got the Mexican Pizza thanks to her perseverance and ability to create a tune Taco Bell couldn’t resist.

When the Coachella outdoor music festival returns for the first time in two years this April, performers will be greeted by a sea of unmasked — and potentially unvaccinated — fans as the struggling concert industry stirs back to life.

Organizers said on Tuesday that attendees would not be required to wear masks or be vaccinated or tested for the coronavirus at the Coachella Valley Music and Arts Festival, which drew up to 125,000 fans a day to Southern California and was one of the biggest music festivals of the pre-pandemic era.

“There is no guarantee, express or implied, that those attending the festival will not be exposed to Covid-19,” Goldenvoice, a division of the global concert giant AEG Live, said on the Coachella website.

Goldenvoice noted, however, that the festival’s Covid policies may change “in accordance with applicable public health conditions.”

Goldenvoice also said on Tuesday that Stagecoach, a country music festival in Southern California, would have no requirements for guests to be masked, vaccinated or tested. The festival was set to run for three days in late April and early May.

It has been a turbulent two years for the concert and touring industries as a number of events were canceled because of the coronavirus. In the last year, since Covid vaccines became widely available, organizers have grappled with decisions over whether to hold the events at all and whether to require masks, vaccines and testing.

Over four days last summer, the Lollapalooza music festival in Chicago ran at full capacity, with its 400,000 attendees being required to show either proof of vaccination or a negative Covid test. According to data released by the city after the festival, infection rates among the concertgoers were low.

Coachella did not run in 2020 or 2021, and was canceled three times over the pandemic, including a rescheduled date in the fall of 2020.

Before the pandemic, Coachella, which is widely seen as a bellwether for the multibillion-dollar touring business, had put on a show every year since 1999 at the Empire Polo Club in Indio. It typically runs over two weekends in April.

The organizers of Coachella announced in January, after weeks of speculation, that the festival would be back this year. It is set to be headlined by Billie Eilish, Harry Styles and Kanye West.

While music festivals remain a distant memory in most parts of the world, a full-scale Ultra Music Festival event went on in Taiwan on Saturday, November 14th. The event, which took place at Dajie Riverside Park in Taipei, was billed as a part of Road to Ultra, the long-running series of one-day festival events in cities around the world created and founded by the team behind the famous Miami electronic dance music festival.

The successful festival serves as a big win for the Ultra organizers, whose Covid-imposed cancellation of Ultra’s flagship Miami event in early March was among the first in a cascade of cancellations that saw much of the global live music industry to screech to a halt over the ensuing weeks.

As the United States struggles with its nastiest spike to date and the prospect of a full-blown music festival remains entirely out of the question, Taiwan has had immense success in curbing the spread of the coronavirus. As of the end of October, the East Asian country had gone 200 days without a locally transmitted COVID-19 case. 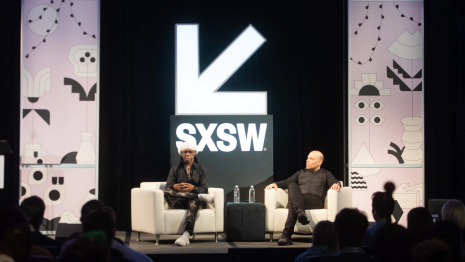 The suit was filed in U.S. District Court for the Western District of Texas Austin Division on April 24 by two plaintiffs, Maria Bromley and Pauta Kleber, who claim to have spent over $1,000 each on attending the event that was originally scheduled for March 12-20 in Austin. On March 6, organizers announced they were forced to cancel the annual festival due to a city order that prohibited large gatherings in order to prevent the spread of COVID-19.

Following the cancellation, SXSW informed ticket and pass holders that they would not be receiving refunds. Instead, the independent festival offered pass holders free registration — equivalent to the amount they spent for the 2020 festival — that would be valid for SXSW in 2021, 2022 or 2023. They were also offered a 50% discount based on the amount they spent in 2020 for another one of those three years.

According to the lawsuit, both plaintiffs were informed that the offer expires on April 30, 2020. The complaint notes that these offers were put forth by the festival on March 12, which additionally stated that it “cannot be certain that future festivals will occur.” 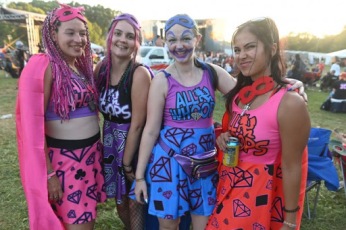 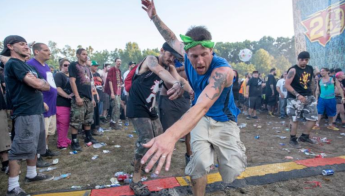 The Insane Clown Posse announced on Wednesday that they’re canceling this year’s Gathering of the Juggalos due to the ongoing coronavirus pandemic.

The festival celebrating the hardcore hip hop duo will be postponed to next year.

“The bottom line is that we REFUSE to risk even ONE Juggalo life by hosting a Gathering during these troubling times,” the Insane Clown Posse said in a statement posted to Twitter.

The group, comprised of Violent J and Shaggy 2 Dope, then referenced their most recent album titled “Fearless Fred Fury” to advise their fans “to heed the words of Fred Fury and Flip the Rat: ‘BE SAFE: Watch your step and take it easy. You can’t replace what you mean to our team.”

Festival posters always get me. It’s a reoccuring game of “Can the text get any smaller?”